HOW TO GET INTO AMATEUR RADIO 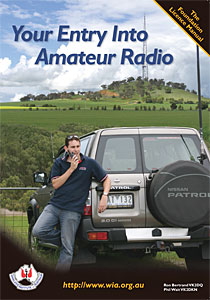 ​Before you can go on air you need to take an assessment. This includes regulations, theory and a practical. In Australia, like many other countries, there are three levels of licence:
In the United States they are:
In Great Britain they are:
If you join an amateur radio club you'll find that they hold regular courses for all three grades of licence and they have members who are qualified assessors.
For the Foundation Licence you really need to get a copy of the excellent book, Your Entry Into Amateur Radio, published by the WIA (Wireless Institute of Australia).
This contains everything you'll need for your Foundation Licence plus a whole lot more. Even though I'm past the Foundation stage I still find this book an excellent reference.
As a rough rule of thumb, the Foundation Licence involves a weekend course, with the assessment held on the Sunday afternoon.
The course for the Standard Licence is usually spread over several weeks as it requires about 40 hours of study. I can thoroughly recommend the course run by the Radio & Electronics School (R&ES), www.res.net.au. It is very reasonably priced. The course arrives on a DVD with about 40 lectures, loads of exam practice drills and a documents folder with heaps of reference material. Once you've completed the course you should go through the exam drills over and over again and you'll almost certainly pass the exam. It even got me through it!
​The Advanced Licence requires about a further 20 hours of study in addition to the Standard Licence.

If you pass your assessment the assessor sends all the paperwork off to the WIA who will process the paperwork and send a callsign recommendation to the ACMA who actually issue the licence. The whole process takes about three to four weeks. You can't go on air until the ACMA have issued your licence and it's on the ACMA database. I know it's frustrating, but them's the rules. Hopefully one day the WIA will move into the 21st century and you'll be able to do the assessment online to speed up the process.

​Licence Restrictions and Privileges
I won't go into these in great detail as they are already well documented on the WIA, the ARRL and the RSGB web sites, but I will make some comments on the various Licences.

Foundation Licence (F Call)
Restricted to 80m, 40m, 15m, 10m, 2m and 70cm bands. Maximum transmitting power 10 watts. How far will 10 watts get you? On a good day all around the world. When I was a Foundation Ham I worked NP4A in Puerto Rico and JH7MQD in Japan on 40 metres and 10 watts power. However, conditions were exceptional. As a general rule 10 watts is very limiting. I used to find it very frustrating when I was unable to get on to an Australian net when there was a high noise level and everyone else was getting through, including other Foundation Licence holders. Were they really on 10 watts?

​Standard Licence
You can now use the 20m, 6m, 23cm, 13cm and 6cm bands In addition to the F Call frequencies but, best of all you, can now crank up your RF output to 100 watts. This will not get you 10 times further than 10 watts but about twice as far. Look up the inverse square law on Google if you want to know why. If you are serious about working DX (long distance) you really do need at least a Standard Licence. The Standard Licence also allows you to supervise a non-licenced person.

Advanced Licence
With this you can use all the Australian amateur frequencies and do lots of other exotic things like Amateur TV. You can increase you power to 400 watts of higher if you apply to the ACMA for permission.

Callsigns
When you get your licence you'll be given a callsign. You can even choose your own callsign if it's available, not rude and you fork out a a further $20 in addition to the licence fee of $70. It's easy to tell what sort of licence someone has and which state they're in by their callsigns.

Then all Foundation Licences have four letters beginning with "F" , mine was VK3FINE (yes I paid for it!)
All Standard Licences are three letters starting with H, L, M, N, P, or V. These are easily remembered by the following mnemonic: Half Limp Men Need Proper Viagra.
Basically, all the rest are Advanced Licences which can have two or three letters, except for repeaters and beacons that start with R.
Powered by